This weekend starting at 5PM on Saturday August 9th, we saw the 24 hour grand opening of the Aspen Art Museum with an eclectic mix of art lovers, fun lovers, music lovers and dance lovers, coming together to celebrate this (controversial) landmark, that dominates the corner of East Hyman and South Spring Street. 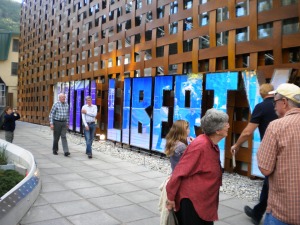 Whether you love it or hate it, there’s no question that people are fascinated by the museum’s unique architecture and once inside, you’ll quickly forget that Aspen is a small resort town.

With its soaring ceilings and walls of glass, the interior lower floors 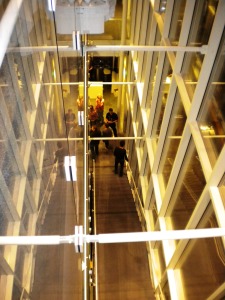 and stairs brought to mind a smaller scale version of the Chicago Art Institute’s modern wing. But that’s where the similarity ends.

Touring the spacious lower level gallery there are some interesting works composed of body parts pressed into pigment then rolled onto paper. Not unlike the potato prints of our youth but in some instances, a bit naughtier.

The temporary housing exhibit generated a lot of interest with some individuals trying the structures out for size.

By late evening, and after the street music, numerous workshops and movie screenings were over, the action moved to the top floor where the open area known as ‘The Moving Ghost Town’ or, ‘the 3 tortoises with I-Pads attached to their back’ was in total darkness and there was no sign of movement, probably because Mr Tortoise had retired for the night.

one. I suspect a number of people had signed up for the Dream Interpretation Activity event, allowing them to really let rip without fear of being pulled over by the local constabulary as they drove home. They weren’t going to get much sleep however as the ‘Silent Dance Party’ didn’t end until 2am and the ‘sleepover’ event was from 3-7AM.

The Silent Dance Party was a huge success and a lot of fun. Although folks not wearing earphones couldn’t hear the techno music, many danced along anyway and the chatter noise level remained very high. The tortoises should get a better night’s sleep tonight.

Until the event officially closes at 5PM today (10th), you could choose to rehabilitate yourself with sunrise Yoga; families could participate in clay modeling workshops then  enjoy a performance by the Theater Aspen’s Summer Teen Conservatory, followed by a cooking demo and lunch in the new cafe.

Finally and bringing the 24 hour ‘happening’ to a close, a panel discussion on Liberty and Justice for All  – ‘An interdisciplinary conversation addresses pressing civil rights issues of the twenty-first century in response to Jim Hodges’ outdoor installation.’

With this and so much more happening in Aspen on a weekly basis, how could you possibly want to be anywhere else? 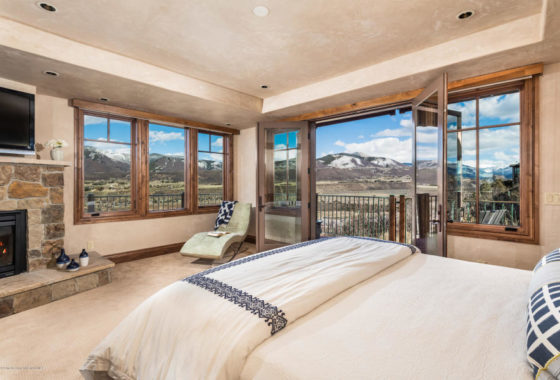 For a community that was largely developed 40-50 years ago, the Aspen Valley has its share of dated housing stock that could use a little re-fresh.  This is why we are seeing so many remodels and new build happening  in Aspen and Snowmass.   … END_OF_DOCUMENT_TOKEN_TO_BE_REPLACED 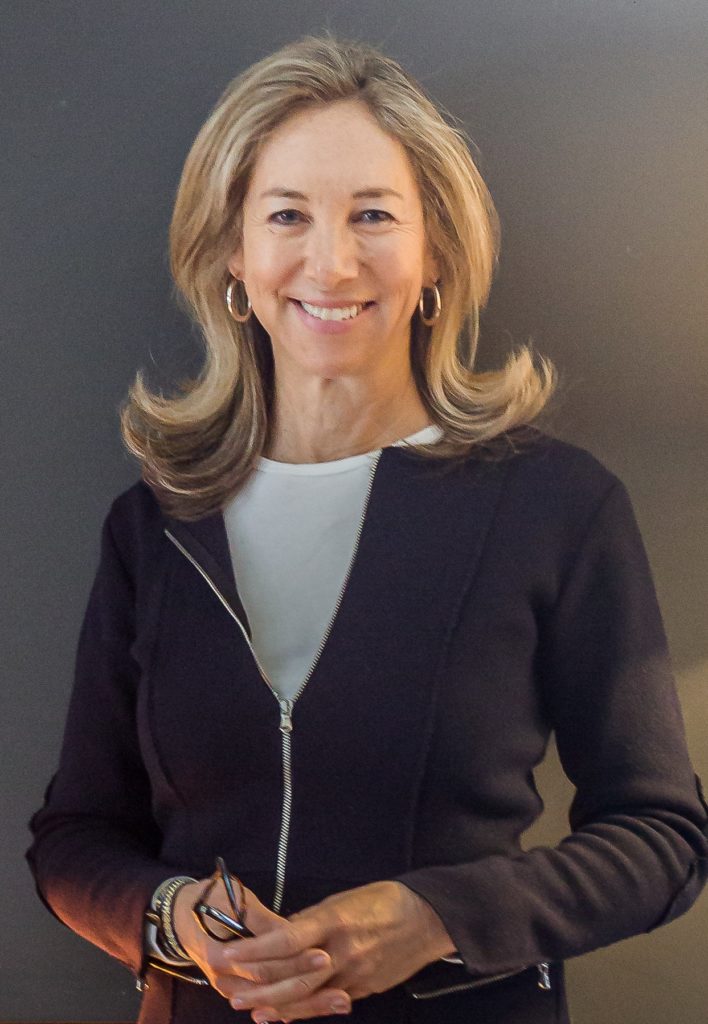